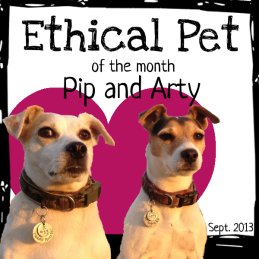 Ethical Pets of the Month, September 2013

This month we have super-cute caring duo Pip and Arty as our Ethical Pets of the Month! Here are a few words from Darren, Pip and Arty’s dog-walking daddy:

We re-homed Pip & Arty three years ago this month. Their previous owners could no longer take care of them because their relationship was breaking down & they felt they were being neglected. We came across an advert explaining their situation & instantly fell in love with them.

We were only planning to re-home/rescue one boy or girl but we are so glad we decided to look after both Pip & Arty; in fact, Pip & Arty chose us. Arty was 5 years old in August & Pip was 4 in June this year. They are very sociable and also volunteer their time as working therapy dogs for Sussex Caring Pets.

Arty is a Jack Russell/Chihuahua cross & is just such an adorable little boy. He loves nothing more than cuddling up on the sofa & getting his belly rubbed. He adores his food/treats & is a gentle, uncomplicated little person. Out on walks he likes to dig holes & lick pebbles on the beach. He has the softest fur (esp’ on his ears) and smells like uncooked basmati rice – just adorable.

Pip is a Parsons Russell Terrier & she is ball obsessed & loves to swim. She is very graceful & agile & gets so excited when she sees people in the sea. Pip will whine until we let her go & join them. With limitless energy, she darts about all day but as soon as the sun goes down, she is fast asleep. She loves to lie directly in front of the log fire at home & will not move all evening!
We found Ethical Pets online through a search engine because, as vegans ourselves, we came to a decision that animals should not suffer so that Pip & Arty could eat. After months of research & consideration we decided to feed our dogs a plant-based diet. Dogs are omnivores, like ourselves, &  I make their food (a selection of quinoa, veggies, sprouted beans & hemp oil) & mix half & half with Benevo. The dogs love the crunch that Benevo has & it compliments their food perfectly. I generally pour a little hot water over their food so its warm when they eat it. The reason I choose Benevo is that it is organic, wheat-free & vegan. It is fortified with the right nutrients for them. I also give them rice bones which they just adore. 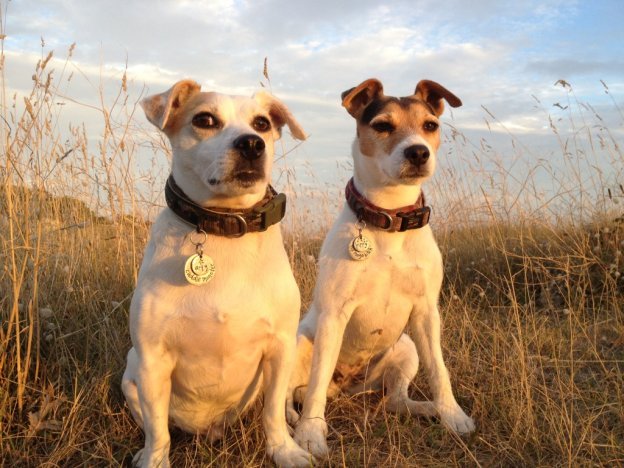 Darren lives in central Brighton with his partner and runs a dog walking and pet sitting service called Love:Walk:Play. He is a qualified hairdresser and used to work as for a big corporation and then as a manager in a well known airline, but today, he works harder than ever, walking 8-10 miles a day and caring for all creatures great and small! Why not like Love:Walk:Play on Facebook?