This is an overview of Animals: A New Ethics, the March/April 2012 edition of Resurgence magazine. It is made up of quotes from the issue, so I named it a Quoverview!! Below that is a traditional review. Happy reading! – Anna x 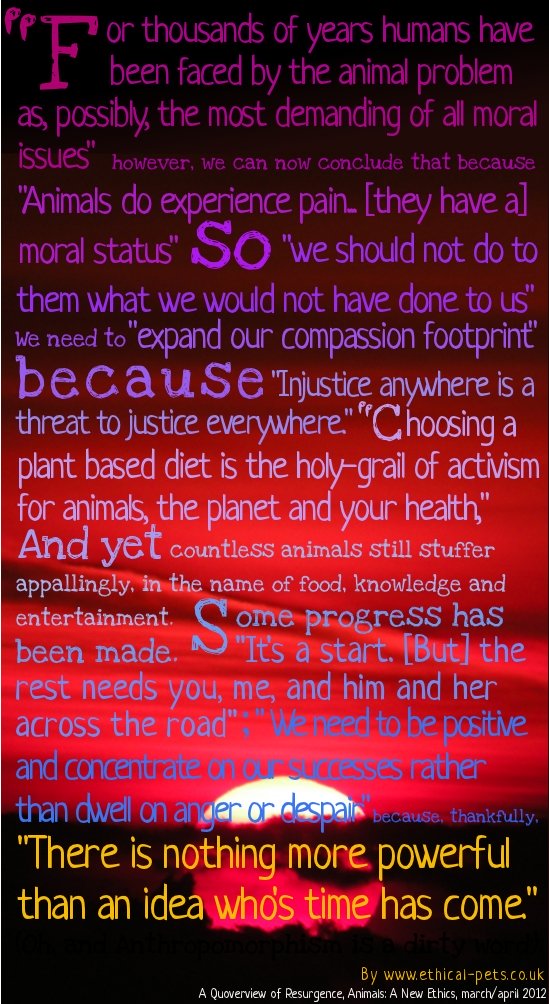 Very nice! So, what is the magazine about?

Resurgence magazine promotes “ecological sustainability, social justice and spiritual values”. [1] This special issue of the magazine discusses how humans treat non-humans, and how non-humans treat each other. There are some facts and figures, and a lot of ideas too.

By insisting that animals are moral “we are not inserting something human into animals, but we’re identifying commonalities and the using human language to communicate what we observe” – From Wild Justice by Bekoff and Pierce, quoted by Peter Anderson, page 57

Is it worth reading?

Yes. The writing is clever, interesting and provocative – good enough to preach to the congregation, not just the choir. Send copies to your most sceptical friends. It is also beautifully presented, with a broad focus, providing art, poetry and recipes alongside the articles. There are no graphic photos of suffering animals, which I personally found helpful.

Human treatment of animals was not allays this savage, belief in human superiority didn’t become commonplace till the end of the 13th century, when the teachings of Thomas Aquinas became popular. – Richard Ryder, page 14

No. If you are vivisection expert, then you will learn of the plight of the sacred cows. If you know your theology, then do you also know about Franz Marc and the Blue Rider group? Or how to bake Panforte Nero? This magazine is full of surprises. Most of all, it communicates a real sense space and time – I feel less alone and more optimistic, and I see my place, for better and for worse, in the fight for animal welfare and equality.

“A common assumption we make about animals that they only live in the moment” – this has shown to be untrue on a behavioural and biological/hormonal level, because animals, from Starlings to Baboons, experience prolonged emotional states, such as “pessimism, optimism and bereavement” – Jonathan Balcombe, 32.

Yes, it is. It’s not just the content though, it’s how the content is shaped. The why is discussed, not just the usual what, when and how. The answers are described, not just the problems. The issues are discussed from many different angles, from the scientific to the spiritual – and yet, as you can see from my Quoverview above, there is also cohesiveness. The diversity of voices starts to merge somehow, and in the end, you hear just one voice – spurning you on to be, to do more… and better. It’s hard to tell if this is simply good writing, clever editing and design, or if it’s more than that; an organic emergence of unity among us.

It’s only after the fall that Adam and Eve ate meat – before then, before the first sin, they were vegan. – Tom Regan, 13.

There are no references: this is both dis-empowering and self-defeating. It reduces credibility, increases the risk of shoddy writing and inhibits the propagation of new thought and new argument. It is well past the time for the animal rights/welfare community to learn this and to make an effort to show. their. evidence. If you accuse a “slaughterhouse with organic accreditation” [2] of infringements of the law and of cruelty – name them, shame them: let me make up my own mind! If you describe inhumane experiments in a lab, tell me the titles of the papers! Knowledge is power: so stop playing Chinese whispers!

Soil is the largest carbon sink of all – Juliet Gellatley, page 16

Point taken, so where can I buy a copy?

You can buy on-line here, or search for stockists here.

“It is natural and “animal” to be good, compassionate, empathetic and moral” – Marc Bekoff, page 35

Photo in Quoverview By Moise Nicu (Own work) [CC-BY-3.0 (www.creativecommons.org/licenses/by/3.0)], via Wikimedia Commons

“Per hectare a [badger] cull would cost more than a vaccination programme” – Brian May, page 40